If you’ve ever watched snowboard rail trick videos, you might have been fascinated to see how brilliant and cool they looked. If you want to learn how to do these tricks yourself, you’ve come to the right place.

There are many rail tricks you can do depending on your skill level and expertise. As snowboarding continues to grow in popularity, these tricks have also been properly named and researched. This way, it’s now possible to find great tutorials for learning how to do each of them.

In this article, we will explain the best rail tricks you can learn as a beginner, the different ways to carry them out, and how you can prepare yourself for them.

What Are Snowboard Rail Tricks?

You may have seen snowboarders coming down a slope at high speed, jumping up, then sliding down a rail. Sometimes these are long, drawn-out slides that are executed perfectly. Other times, if you’re a regular viewer of epic fail videos, these slides end up with the person’s face in the snow. 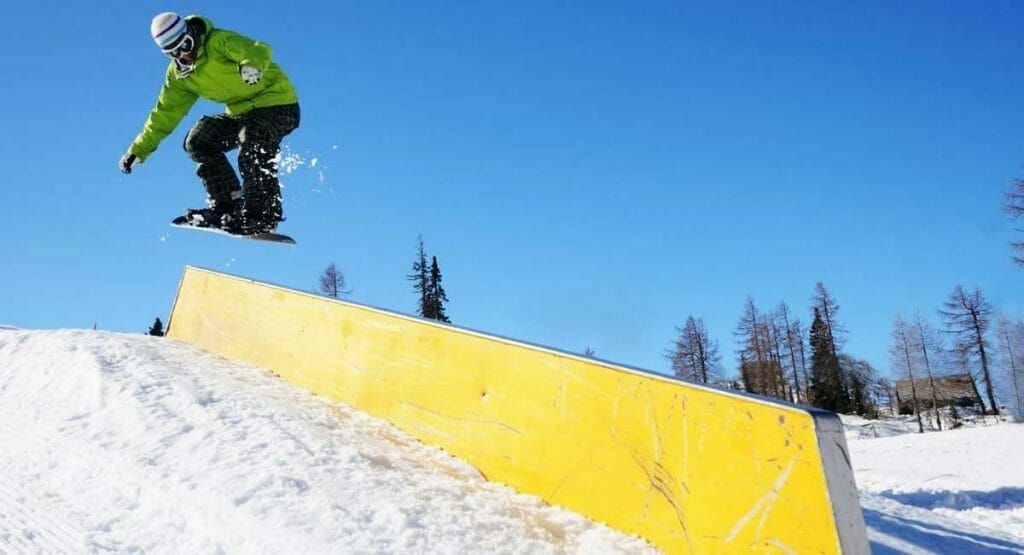 A snowboarding rail trick is basically where you use your snowboard to slide down a rail, along with a mix of other tricks, based on your skill level and the speed and angle at which you approach it.

Snowboarding is heavily influenced by skateboarding. This is because skateboarding can be carried out in a larger variety of terrain and locations, which makes it a more popular and accessible sport.

To calm your nerves while snowboarding, some music can help. Check out this guide to the best headphones for snowboarding.

Tips You Need to Keep in Mind

If you’re an intermediate to expert snowboarder who knows his way around a terrain park, you can move on to boxes and rails with a little practice. However, no matter how good you are on a snowboard, you cannot just wake up one day and start doing snowboard rail tricks.

There is an element of practice and visualization that goes into these tricks. The next time you’re at a park and you want to take a break from the snow to ride the rails, here are some tips you can keep in mind before you decide to take on the challenge.

Make sure you see someone else doing the rail trick first before you decide to do it yourself. Watch them carefully and observe all the details. This will help you gauge the speed you need to be at and the position you need to hold your body in before tackling the rail.

It is always a good idea to have someone around when you’re beginning to learn your rail rides. These tricks can result in serious injuries if things go wrong, and having people around to keep an eye on you is recommended.

Before you hit a rail, check out the park you’re in and take a quick tour. The parks that contain these rails are groomed regularly for the season, but there still might be a surprise waiting for you no matter how well you know it. A quick ride around the park will give you a better idea of how to take off and land safely.

While you should always wait and let someone who knows what they’re doing hit the rail before you do to gauge their speed, it’s always safer to do it fast. While this might seem counterintuitive, hitting the rail at a higher speed will both improve your chances of going through the entire rail, as well as make it easy for you to get off it if you start to lose balance.

Always remember to keep your base flat. Doing this will ensure proper placement of weight on the rail and give you the appropriate balance to pull off the trick on a common snowboard rail.

Keep your knees bent. While this is a common tip for snowboarding, it is even more important while tackling a rail, as your body will need proper balance to complete the trick. This lowers the center of gravity of your body and helps you maintain stability on rail rides.

Keep your weight even on both feet, otherwise, your board might slide off the rail, especially if you’re not going fast enough.

While this might not sound very important, always imagine how the trick would look in your head before you actually do it. This will play an integral role in ensuring the success of your trick. By seeing it first in your mind’s eye, it helps prepare your body for what it needs to do.

Another thing you need to keep in mind is that you should avoid looking down once you’re on the rail, which will make you lose focus and balance. Keep your eyes toward the end of the rail to ensure a better chance of success.

Do not tense up before your jump, while you’re on the rail, or when you land. Keep your body relaxed and in the proper position to avoid injury and help get the most out of the experience.

Easy Tricks to Try Out

Small snowboard rail tricks, also known as jibs, can be easy to master if you’re already well versed in snowboarding. The three key performance points of a successful jib trick are doing the jump right, maintaining your balance on the rail, and landing properly.

When you approach a box or a rail from the front, the trick is called a frontside rail trick. It is often abbreviated as an FS trick. This means that relative to the direction you’re facing, the rail or box is in front of you.

When you approach a box or rail from behind yourself (your back is facing the rail before you jump), the trick is called a backside rail trick. It is often abbreviated as a BS rail trick.

Hitting 50s on rails means that your body is completely parallel to the rail while you’re sliding down it. Your feet are on either side of the rail, balancing the weight equally between your two feet.

Boardslides can further be classified under frontsides or backsides, depending on where you approach the rail from.

When you use the lip edge of the snowboard to slide across the rail, the trick is called a lipslide. In a lipslide, your weight is not evenly distributed across the board as it is in a 50-50.

For this reason, lipslides are more difficult to pull off than both 50-50s and boardslides, as you have to get enough practice to know how much weight you need to put on either foot to maintain balance throughout the move.

Like boardslides, lipslides are classified under frontsides or backsides depending on which side you approach the rail from.

As a beginner, there will be a lot of things you need to keep in mind if you want to do the perfect rail trick. However, there are also a number of things you should avoid to make sure you don’t fall or end up injuring yourself.

1. Keep Your Board Flat

The base of your snowboard needs to be flat at all times when you’re doing a snowboard rail trick. This means that you do not want to put too much pressure on your toes or your heels.

This ensures that the force on the snowboard is evenly distributed on both sides. If you end up putting some extra pressure on the heel or the toe, you might end up slipping off the rail.

Another mistake you need to avoid is rushing into tricks. If you’re not confident of your snowboarding abilities, you might want to polish them first before trying something dangerous. Jumping and landing properly are important aspects of pulling off a successful rail trick, so master that first.

Going too slow is another mistake beginner snowboarders make when they’re approaching a rail. It will be easier to keep your balance and successfully slide across the rail if you’re going fast. Going slow will increase your chances of losing momentum and sliding off the rail or stopping before you have executed the move. In this case, speed is safety.

Snowboarding is a fast and exciting sport, and rail tricks are an excellent way to enjoy yourself, test your abilities, and develop your expertise in the sport.

Even amateur snowboarders can try out these tricks when they learn how to give themselves a bit of speed and how to hold a balanced stance. If you’re a woman trying her hand at snowboarding, check out this guide to the best beginner women’s snowboards.

We hope this article has helped you learn more about snowboard rail tricks and how to carry them out safely and effectively. If you’re interested in similar topics regarding snowboarding, please feel free to check out our other articles as well!