Performing snowboard jumps is much easier than most people think. Like with everything else related to snowboarding, it basically comes down to proper body position, having a relaxed stance, and finding that extra balance that will allow you not to fall on your face.

According toSnowauthorities.com, most people never develop their snowboarding skills due to fear. Yes, we would all love to learn how to jump, but most of us are too afraid of breaking something.

In this article, we will teach you how to perform this basic skill safely, and how to have complete control while doing it.

How Do You Perform Beginner Park Jumps?

Doing a basic snowboard jump is something that everyone can learn how to do regardless of age.

When learning jumps, it is best to start with the smallest possible moves. Focus on the movement that will get you in the air, as well as the landing motion. If you nail these two, even on smaller jumps, you will be able to do advanced tricks in no time.

It is crucial to control your body during jumps. Advanced snowboarders rely heavily on their stomach muscles and legs to increase hang time. Developing basic jumping technique will help not only with jumps, but to feel more secure on the snowboard.

Besides developing crucial skills, you also need to consider the equipment. Having a proper set of snowboarding boots and a snowboard that suits your natural features, will help immensely. Alpine skiing injuries and snowboarding injuries are sometimes associated with poor choice of equipment.

Jump can refer to all sorts of things. Whether it’s a side hit, jumping off of a cliff, or performing a major park jump – they come in various shapes and forms. After figuring out beginner jumps you can try spinning jumps, such as 180s and 360s.

First off, let’s go through a few basic terms.

When we say that a person has performed a park jump, this means that they’ve used one of the epic park features for the trick. In most cases, there will be a downward slope in the terrain that allows you to gain moderate speed prior to jump. This leads to much easier jumps.

A “side hit” or “cut up” is a jump performed at the side of the run. Usually, other snowboarders will cut in and out of the run to perform the jump.

In order to make a jump, you will need to get a good takeoff. The snowboard’s edge is called the lip, and this is where people usually make mistakes. Beginners usually try to jump from the lip, and they stay on the takeoff for far too long. 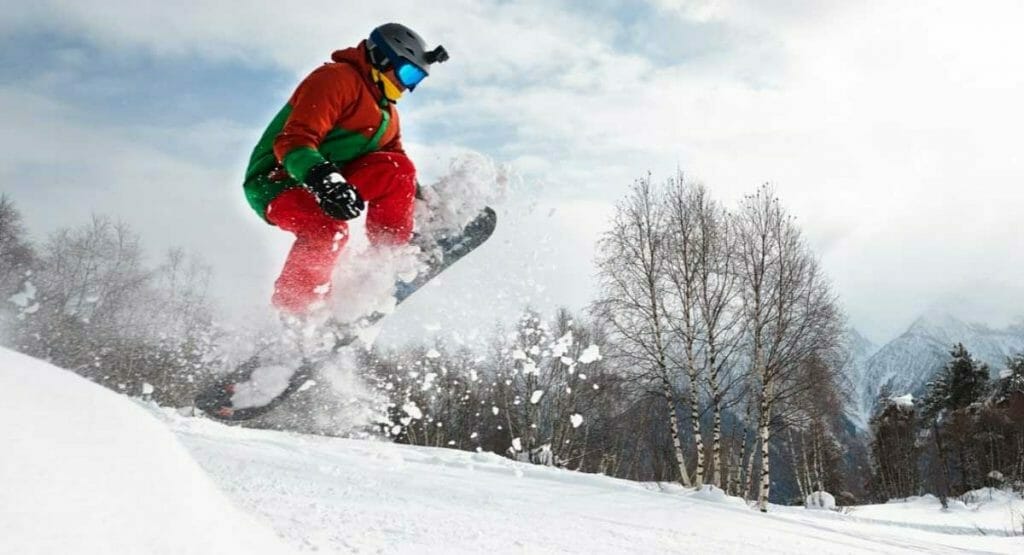 Whenever you make a mistake during landing, it can be dangerous and potentially lead to injuries. Nailing the speed and air time can go a long way to stayingsafe.

Performing a proper jump can be done by “hitting the tranny.” This refers to a downward slope that will be able to properly absorb our landing. Going too far is called “overshot” or “bottom out.”

How to Jump on a Snowboard

When learning jumps, there are a few things you need to focus on.

First off, you need to learn how to ollie. After an ollie, you will be able to take off the ground with the snowboard’s tail being the last one.

The second crucial skill is learning how to go in a straight line. This might sound strange, but people tend to veer off just before the jump. This usually happens as they get scared, and start having second thoughts just before the take off.

A change in direction can also happen due to inexperience. So, this is another technique you will need to learn before you can even practice jumping.

You also need to get accustomed to changes in pitch. During the jump, the first and the last part will feel very steep. This can be kind of disorienting especially if you previously rode on a flat earth.

Perhaps the best way to get adjusted is to start riding black diamonds and blue squares. Always remember that you’ll need rollers on the run.

Once you get accustomed to going over the rollers, you can try doing ollies off of it. If you wish, you can add a grab to the motion. This is probably the best way to get used to changes in pitches.

Where Should You Jump From?

First off, you should check the features of the park before trying any jumps. Plan for your jump, and see if the takeoff is good for a beginner. Observe other snowboarders to get the feel for speed. If you are a beginner, you can also consult snowboarding veterans and instructors.

If you wish to practice a bit, you can roll over the jump and add ollie to it. That will reduce the risks while still giving you the feeling of the takeoff area. When you get the feel for it, you should do your first proper jump.

The Best Way to Safely Perform a Jump

The most important thing to remember for doing safe jumps is knowing the speed. You can learn more about this by speed checking other snowboarders as they perform jumps, or you can ask them yourself.

Getting the speed right is the best way to stay safe. Low speed or excess speed will make you miss the sweet spot, thus increasing the odds of an injury. Bear in mind that, even if you make a mistake during the jump, you will be relatively safe by landing in the right area.

You don’t want to drop to a flat base or to land on the knuckle. There is no pitch that would disperse the energy. Besides the fact that you need to hit the sweet spot, you need to ensure that board comes first.

The Best Way to Approach a Jump

Here are a few additional terms you need to keep in mind.

“Setup carve” is a phrase that refers to taking a carve during the jump. When you do it, you will be able to slow down a bit. “Speed check” allows you to reduce speed by pushing the edge on a setup carve.

When you ask about the speed, you might get several answers such as “jump one,” “jump two,” or “jump three.” The jump three is the fastest one. You shouldn’t reduce any speed prior to jumping, or you simply won’t make it over.

Your main goal is to adjust speed properly to hit the sweet spot, an area just beyond the knuckle. The sweet spot will allow you to disperse energy properly, while simultaneously allowing you to retain most of your current speed. By not losing any speed, you will be ready to make the next jump down the slope.

It is all about finding the right technique. You need to find a method that will allow you to pop properly, and retain the balance when you go off the lip. If you start going to the side, or if you start feeling wobbly, this is a good sign that you took the wrong approach. By using the right technique you should feel good while in the air, and you should be able to grab the board.

Popping Off the Right Way

Before you can jump, it is crucial to prepare your legs the right way. They need to be bent, springy, and to be ready for a pop off. As the board goes over the lip, you need to push off the ground with all your might in order to get enough air time.

Popping off resembles an ollie. The main difference is the popping off is not that exaggerated, and you will do it on a flat ground. Before you pop off, the tail needs to be on the ground for as long as possible. This will propel you and provide enough energy.

Depending on the distance of the landing spot, you will need a harder or softer pop off. It is important for a snowboard to go straight from the lip. Experienced snowboarders will focus on the snowboard instead of watching the air in front of them. In a sense, it is similar to jumping off a trampoline.

Besides mechanical things such as speed and direction, you also need to consider the legs. If you load them enough, you can get much more air time. When it comes to big jumps and spinning jumps, you will need to add an ollie. Otherwise, you will scratch the lip, losing speed in the process.

As soon as you pop off, the last thing you want to do is think about the landing. Inexperienced snowboarders tend to overthink it, which might affect their landing.

Once you get to the peak height, you will slowly start descending. At this point, you should start thinking about the landing. It is crucial to level out at the highest point. This will provide a good basis for landing down the right way.

Even the slightest tilts can cause you to twist mid-air. This is precisely why it is so important to remain centered and balanced as you go off the lip.

While grabbing the board might seem excessive to you, as someone who is jumping for the first time, this is a method that can add to the stability. Grabbing the board is the best way to stay on the right track. Another benefit is that it will allow you to keep your shoulders in the proper position. When the shoulders go above the snowboard, it is much easier to ride straight after making the jump. 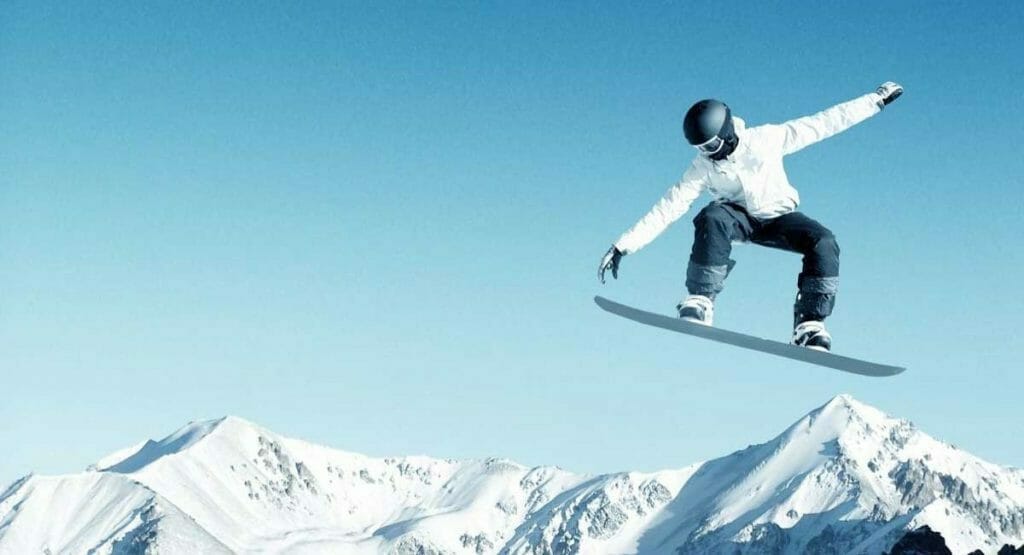 When you reach peak height and you’re feeling stable, it is time to check for the landing. Ideally, you should straighten up your legs before making impact and then, upon impact, you can bend them once again to better absorb the energy and prevent damage to joints. Straightening the legs too early is another common mistake. So make sure to consider that as well.

How to Land a Snowboarding Jump

As mentioned, it is very important to bend the legs. If your legs remain straight while you’re in the air, it will completely ruin stability, and any control that you might have in the air. Although you might not notice the change in the air, you will definitely see it upon impact. Loss of control will make you spin out or simply crash.

Another thing you can do is to land on the tail. Now, that doesn’t mean you should fall right on your bottom; just make sure to scratch the surface a bit with your butt. This little movement will allow you to land on a flat base and prevent loss of speed.

One of the last things worth mentioning are the weather conditions. Temperature can quickly change on the mountain and the same goes for the elements. Shifts in wind, increased ice and snow can all affect your speed, and with that, your landing.

The best thing you can do is always plan your jumps. This is especially important when you wish to make bigger jumps as they require additional risks. You should only do them during nice weather, when there is good visibility and barely any wind.

If you want to learn how to jump on a snowboard, you need to be very patient. Most people think they will nail the jump on the first go, but this is rarely the case. Even if you had experience with similar sports, you will likely fail the first time you try to make a snowboard jump.

Make sure to ask around for the best jump for newbies, and how to execute it properly.