We could tell you a simple yes or no, but that wouldn’t be accurate. Instead, we’ll break down the subject into individual components. First, we’ll discuss the unique elements of each of these board sports. Even though you probably know these already, the refresher will be valuable later.

Next, we’ll talk about the similarities and differences between snowboarding and skateboarding. Then, we’ll discuss why the skills would or wouldn’t transfer, and some other things you should know.

The Art of Skateboarding

With skateboarding, you’re balancing on a wooden board separated from the ground by four wheels. Your foot positioning and reactions are closely linked to your balancing skills.

You’ll also need to propel yourself by kicking against the floor. If you stop, the friction will eventually grind you to a halt.

Lastly, you direct the board by leaning in a certain direction. The edges can help you speed up, slow down, or change directions very quickly. Kicking against edges can also help you perform tricks. 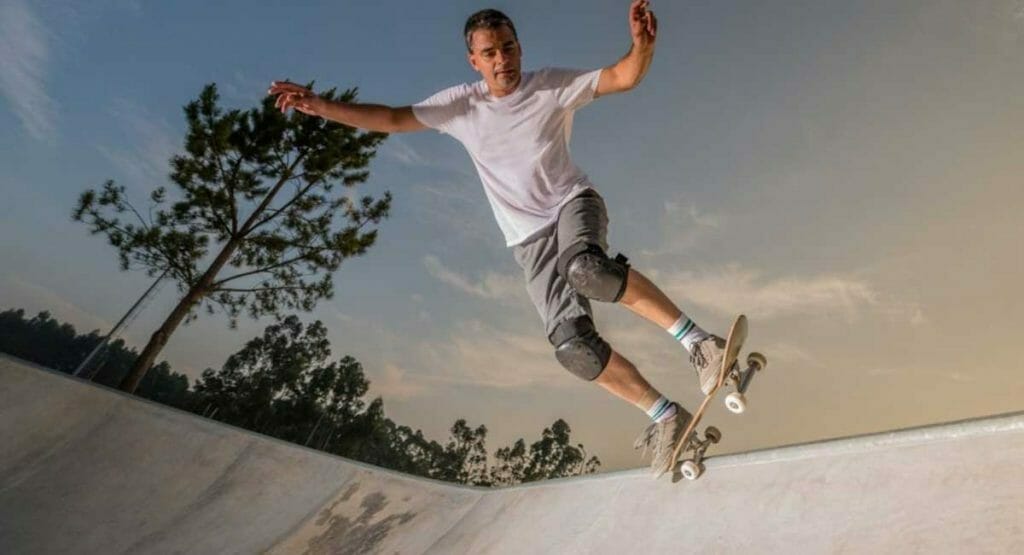 The Art of Snowboarding

Snowboarding and skateboarding have a few things in common: you’re balancing on a board, turning to change direction, and your reactions pretty much keep you upright.

But before we get into the actual skill transfer, let’s look at some other aspects you might learn when you start participating in snowboarding season.

With snowboarding, you’re descending a snow-covered slope, so your momentum needs little or no propulsion from you. Your feet are also attached to the board, so you’ll need fluid movements to balance your entire body.

Snowboarding vs Skateboarding: How Are They Similar?

This is one of the main reasons why people draw comparisons between the two activities. Skateboarders and snowboarders look alike while on their boards. They both stand with their legs shoulder-width apart with knees slightly bent for balance.

However, with a skateboard, your feet will be closer to the tips than they are with the snowboard. We’ll talk more about the differences in the next section.

Carving is quite similar to both activities. You use your head, shoulders, and upper body to turn by shifting your weight in the direction you’re trying to go.

On a skateboard, the wheels respond and take you there, but on a snowboard, movement is accomplished by manipulating the board’s edges.

There’s also an interesting similarity between stopping both boards. You have to gradually come to a halt. If you press on the skateboard too strongly or turn the snowboard too sharply, you may lose balance and fall.

So, the patience of grinding to a halt definitely applies in both snowboarding and skateboarding.

Snowboarding vs Skateboarding: How Are They Different?

Even though the stance is similar, there are critical differences between the two. On a skateboard, your feet are mostly parallel to each other, while with snowboarding, you’re assuming more of a surfing stance.

Your feet are also strapped to the snowboard, meaning you can’t move them around to balance. As a result, you’ll rely more on your body positioning to stay upright – leaning forward and backward.

If you lean forward or backward on a skateboard, you can easily lose your balance and fall. That’s because your feet are free to move around and help you balance.

If you’ve ever ridden a skateboard, you already know that you can’t stop a snowboard the same way – your feet are strapped to the board. Instead, you have to initiate an action similar to the powerslide on the skateboard by turning, shifting your weight, and pushing off the snow.

It takes quite a bit of mastery, like almost everything else associated with snowboarding.

To stop on a skateboard, you use the foot brake by pressing hard against the floor and letting the friction stop you. You can also bail from the board and run until you slow down — that’s not possible with a snowboard.

For starters, stepping on the board immediately makes it roll forward. This could cause it to shoot out from under you, or make you lose balance and fall. If you do fall, you have a hard concrete pavement or asphalt welcoming you.

Snowboarding, on the other hand, is more forgiving. Your feet are strapped to the board, so there’s no risk of it shooting out from under you. You’re also riding on snow, which is soft enough to cushion your falls.

The duration of the learning curve also varies between the two activities. You can ride down a gentle slope within a day of learning to skateboard. With a snowboard, the balance is entirely up to you and it could take you longer to master.

Where they both converge, however, is the advanced tricks. Bigger slopes and complex tricks are quite difficult to master in both snowboarding and skateboarding.

There’s a huge cost difference between snowboarding and skateboarding. You can buy a skateboard and good shoes for around $200. Anywhere with a smooth surface can be your practice ground, and many skateparks are open to the public.

But snowboarding is a different story. You don’t just need a board and boots – which are quite pricey – you also need the proper clothes, gloves, and goggles. And because you need snow, you often need to pay for trips, lift tickets, and other expenses.

Skateboarding is vastly cheaper than snowboarding.

So, Do Skateboarding Skills Transfer to Snowboarding?

Yes, there’s some skill exchange between the two, but not as much as you might think. If you can ride a skateboard, you already have a fundamental understanding of balance and body positioning relative to space. These will come in handy. You can also handle turns quite well, and can carve with relative ease.

But that’s about where the similarities end. Because your feet can’t move freely on a snowboard, you’ll need to relearn balance. You’ll also need to adjust to riding on snow, instead of tires. The vibrations are a little different, and so is the braking and accelerating.

In the end, the similarities may not matter that much because you’ll pick them up while snowboarding anyway. If your goal is to snowboard, it’s best to get on with it. The learning curve is less punishing, and you can get used to the dynamics right away.

Do Snowboarding Skills Transfer to Skateboarding?

If you’re considering upgrading your snowboard to a skateboard, then snowboarding skills might help out with skateboarding. Some people even find it easier because their feet are no longer attached to the board, and they can use them for more balance.

Some of the other similarities we discussed apply. For example, you can turn, or carve, better, and perform tricks after just a little bit of a learning curve.

Speaking of the learning curve, you’ll quickly realize that falling from a skateboard is very different from falling onto snow! It’s way more painful to hit the pavement. Plus, your initial instincts may not be to run and stop, since you can’t run off a snowboard.

Okay, So Which Sport Skills Transfer to Snowboarding?

Even though knowing how to skate can help with snowboarding, it’s not exactly a perfect skill transfer. But one activity that transfers skills quite nicely is wakeboarding.

With wakeboarding, your feet are strapped to the board and you can only use your body to balance. There’s also the subtle element of putting pressure on your foot while balancing to gain even more control.

You also spend a lot of time sideways while wakeboarding. Granted, it’s much more than you do with snowboarding, but it’s something to keep in mind.

Even though the list is short, you’d be surprised at how well skills transfer between these two sports. If you wakeboard a lot, getting on a snowboard the first time will be a breeze because you’re already used to having your feet strapped.

One thing you may have difficulty with is the extra gear you’ll have on. Get past that, and you’ll have a fun time.

Which is Harder: Snowboarding or Skateboarding?

Snowboarding is harder to master than skateboarding because beginner moves like a simple descent can be challenging. So can controlling the board, changing direction, and actually riding. 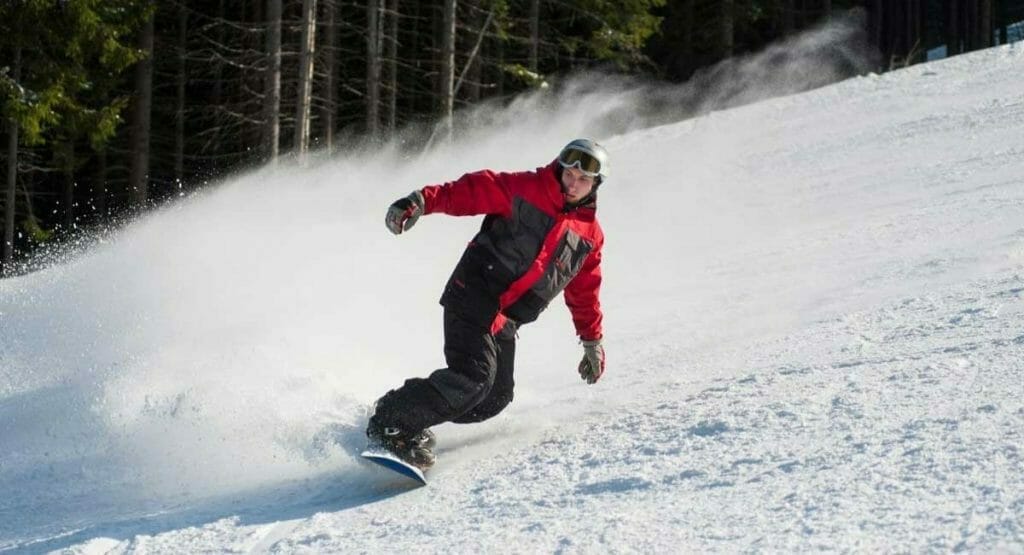 With a skateboard, however, once you get how balancing works and learn to press your feet to steer, you can skate. Controlling your speed is also much easier on a skateboard because you propel yourself, and can easily use the foot brakes to slow down.

Tricks, on the other hand, are much harder with a skateboard. Ollies, grinds, and even boardslides are difficult to do. They require balance, and the cost of failure – falling – is high.

Even though it may not seem like it, snowboarding is much more like skateboarding than it is like surfing. Both are done on solid ground, and that’s an important element. Surfing takes place on water, which adds its own randomness.

Falling from a snowboard is also similar to falling from a skateboard because you’re hitting solid ground, and you can determine, to a small extent, where you fall. Falling from a surfboard is pretty much out of your control. Sometimes, you don’t even know you’re falling till you hit the water!

Finally, some of the tricks can transfer from skateboarding to snowboarding. With surfing, it’s an entirely different game and you’ll pretty much have to learn the entire thing over again.

Which is Harder: Skiing or Snowboarding?

Most pros will agree that these remarks are true because of what you experience when you first try out the two activities.

With skiing, you’re likely to spend most of your first moments upright, and may even learn to slide in a straight line pretty quickly. Once you get that down, you’ll experience greater difficulty with gaining speed and navigating, and especially performing tricks.

The opposite is true with snowboarding: you’re bound to spend the first few hours on the ground. You need a lot of perseverance to learn the ropes and get to a point where you’re ready for more advanced tricks.

If Snowboarding and Skating Had a Baby: Snowskating

Snowskating is the lovechild of skating and snowboarding. As the name suggests, it’s basically skateboarding on snow. The activity requires specialized boards – snow skates – that combine the best features of the two.

A snowskate doesn’t have foot straps, so you’ll have to balance with your feet alone. This is great news if you’re already an expert skateboarder. Snowskates are also shorter than the average snowboard, so the body dynamic will take a little time to master.

With the sport of snowskating, you can perform skateboard tricks on the snow without hitting the hard pavement when you fail. If you want, you can also ride your snowskate on the street, grind, do ollies, and everything else you can do with a regular skateboard.

We’d say it’s the perfect middle ground of snowboarding and skateboarding, and skills you have with any of these two activities will transfer quite nicely.

Snowboarding and skateboarding are both fun activities, and they both require unique skills to achieve success. Luckily, they also share many elements, and as you’ve seen, skateboarding skills can transfer to snowboarding.

However, the skill transfer is limited, and you may still have to ride the learning curve to achieve mastery. Other activities, like wakeboarding, can also help you become better at snowboarding.

If you’re looking to overcome the snowboarding vs skateboarding dilemma, try snowskating. It’s not a mainstream trend, but it’s been gaining traction over the years. Snowskating lets you perform skateboard tricks on the snow, combining the best of both worlds.