If you just got your first snowboard and bindings, then you’re probably very eager to hit the snow and have a good time. However, you might have to wait a little while if you don’t know how to set up snowboard bindings.

Having your snowboard bindings properly set is essential because this is one of the factors that determines if your board is safe enough to use.

With the right guide, you’ll be able to determine what common stance angles are, which common stances are right for you, and how to use the hole bindings properly.

Before explaining all that goes into an accurate snowboard bindings setup, there are a few things you need to know.

This information will not only help you know how important the right bindings are to snowboarding profiles, but it’ll also allow you to understand the role it plays in a smooth or rough terrain park.

What Is a Stance?

This is the term used to describe the precise position of your bindings on your snowboard. This positioning refers to everything from the angle to the width of the right and left snowboard bindings.

In cases where the board has a designated tail and nose, the stance is also used to refer to the leading foot of goofy riders or regular riders.

Broadly speaking, Goofy riders don’t use common stances to regular riders and vice versa. So, before you know which common stance angles to set your snowboard bindings to, you have to first determine whether you’re a goofy or regular rider.

How to Know Your Stance

Even the best snowboarding hacks for your bindings will fall flat if you use the wrong stance from the get-go. In order to prevent this, you need to determine whether you’re a regular or goofy rider.

Fortunately, this is a relatively uncomplicated process. All you have to do is note which foot you lead with while using your snowboard. That is, you need to find your dominant foot.

Please note that being a goofy or regular rider is all a matter of preference. It has nothing to do with your skill level. 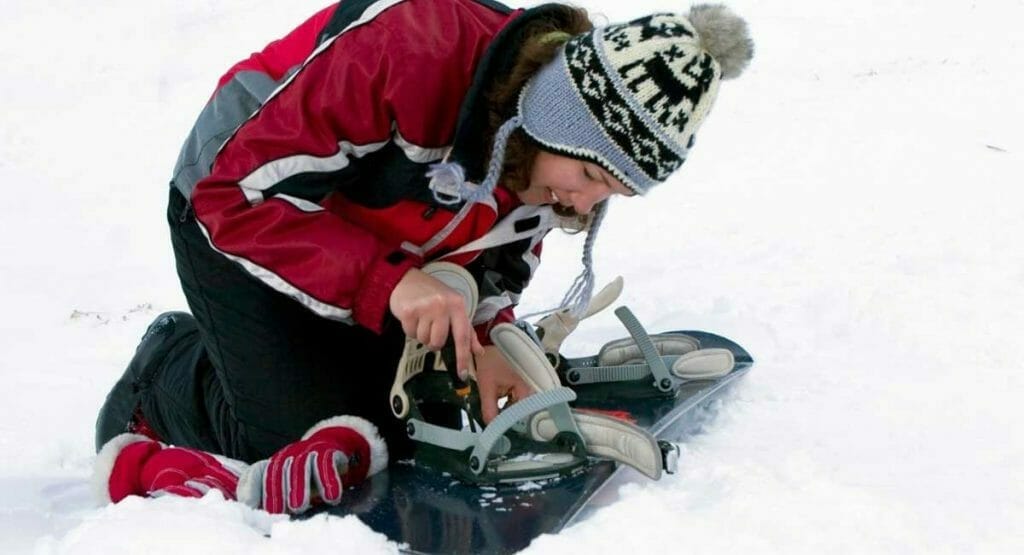 Also, keep in mind that the different types of snowboard bindings are made to be readily and easily adjustable. So, even if you pick a stance that isn’t right for you, you can easily change it.

Before following our tips for stance replacement, you need to know the positions that common stances are fitted in and the reasons.

Stance centering or a centered stance simply means placing your bindings between the nose and the tail of your snowboard symmetrically. Because of this, it lays a foundation for quality beginner stances.

While some advanced and intermediate snowboarders might use stance centering, the majority of bindings serve a better purpose as beginner stances. The reason for this is that a centered stance gives beginners more control of park boards.

Since their style of riding is usually less adventurous, unlike with advanced freestyle riders, the equal nose and tail lengths that this stance provides, regardless of board sizes, ensures their riding switch goes off without any problems!

Stance setback involves placing your snowboard bindings closer to the tail of your board.

Stance setback placement is optimal for reducing fatigue and helping a rider use minimal body movement to perform multiple skills and stunts. However, it isn’t recommended for a beginner rider.

Even though the rule of thumb advises that you never place your snowboard bindings closer to the nose than the tail, stance setback won’t help a beginner rider because it gives them much less control.

An advanced rider or all-mountain rider on the other hand can take advantage of the increased mobility such a common setup offers to shine on a powder day.

When you use this binding setup on all-mountain and powder boards, you can get even more out of the snowboard.

After you’ve found the perfect stance for you, the next task when learning how to set up snowboard bindings is finding the ideal stance width for you.

While many riders favor a 22-in-wide stance for comfortable riding, this isn’t a rule you have to follow.

When making your decision, ensure you go for a comfortable stance that’ll afford you the perfect level of freedom and protection.

If you need help getting the right snowboard stance for you, you can reference stance location markings on the board to see which fits. Alternatively, you could try standing in a power stance position.

When using snowboarding hacks, it’s important to remember that comfort is key. As such, when angling your front and rear binding, you have to pay attention to the comfort of your knees and calves, short and long-term.

You can always adjust common stance angles to fit your body type. This can be done using the adjustable base plates. The bindings’ baseplate discs have markings to represent angles.

By configuring the bindings with baseplates, you can get an angle that complements your body posture best.

Riding styles and experience also play a role here. Many riders prefer to use a variation of the “duck” stance. Depending on how angled the feet are away from each other, it could be an aggressive duck stance or stretched out to be a pure aggressive stance.

For the beginner rider, keeping the front foot anywhere between 15 – 21 degrees and the back foot at -3 degrees or -5 degrees is enough.

Professional riders will often experiment, putting their front and the back foot at 0 – 30 degrees or -15 degrees, depending on how much strain they can handle and the results they want to achieve.

How to Set Up Snowboard Bindings

Now that you know all that goes into getting that natural stance necessary for comfortable riding, let’s get into how to set up snowboard bindings with a simple 7-step guide!

Find a clean and clear space to set your snowboard and the bindings. The place should also accommodate your screws and washers as well. You don’t want anything to go missing.

Step 2: Get the Right Tools

All you need is a drill set. If you don’t have that, a flathead screwdriver will suffice.

As you know now, the right stance direction can make a huge difference in terms of the comfort you get when riding. Since you likely already know your dominant foot, you can just pick that direction.

Your choice of binding angles should match your body posture and type. This is because it is what determines how much strain is placed on your knees and calves while you’re riding.

Some factors that influence this decision include your riding style and level of experience. You can use any of the wide range of common stance angles to help with this decision-making process.

Use your shoulder width to guide this choice. It helps to set the width equal to the hole bindings on both sides of your board type and firmly center it.

Centering is important, especially for beginners, because it can prevent possible injuries.

First, distinguish the left binding from the right. Next, find which end of the snowboard is the tail and which is the nose. Now, set the bindings in line with your stance direction. The bindings must be equal on both sides of the snowboard.

Dip the screw in your washer before placing them in the screw holes. Finally, use your drill or flathead screwdriver to firmly attach the first binding to the snowboard. Repeat the same process for the second binding.

Now you should know how to set up snowboard bindings on your own! With the knowledge of how bindings affect your board, you can experiment more freely to get the best feeling when you finally hit the snow!

So, what are you waiting for? Try out these awesome tips for stance replacement today! If you’re interested in learning about other essential ski equipment or ski-related information, please feel free to keep exploring our site!