There’s enthusiasm that comes with getting a new snowboard, but whether new or old, the joy of new equipment dies with poor management. One way to maintain your snowboard to serve longer is waxing, but how often should you wax your snowboard?

How often you should wax your snowboard depends on a number of factors, such as how often you snowboard, how fast you want to go, and the conditions you generally snowboard in.

Snowboard waxing may appear to be a daunting task, but once you do it a few times, you’ll discover that it’s not as tough as it appears. All you need is a little practice and knowledge of the common mistakes novices make while waxing their board for the first time.

Why You Need to Wax a Snowboard

Broken wrists, shoulders, and collar bones are the most common snowboarding injuries. Some of these injuries are from a poorly waxed or unwaxed snowboard. It’s also said that snowboarders are 50-70% more likely to have injuries than skiers.

If you’re an enthusiastic snowboarder, waxing is a crucial habit you should develop to make your snowboard last longer. A snowboard base is made up of pores, and when they dry out, they make your board glide less and reduce its overall performance and life.

Wax will help prevent your board from drying up by hydrating it and keeping it in optimal condition. Also, it minimizes the likelihood of needing to one-foot your board along flat spots.

When it comes to having a good time on the slopes, having a freshly waxed snowboard is essential. A newly waxed board has a higher gliding ability on the snow, which means you’ll spend less time getting stuck in flat sections and having to unclip.

Do You Need to Wax a New Snowboard?

New snowboards come waxed, which implies that you don’t need to wax your new board immediately. It’s noteworthy that new snowboards often come with factory wax, but it’s not as effective as a true hot wax. Some manufacturers use hot wax, however, double-check with the manufacturer to be sure.

Depending on the wax status on the snowboard, you might decide to use hot wax on your new snowboard straight away. You can determine this by checking on how long the board has been in the shop. The longer it’s there, the more likely you are to wax it. 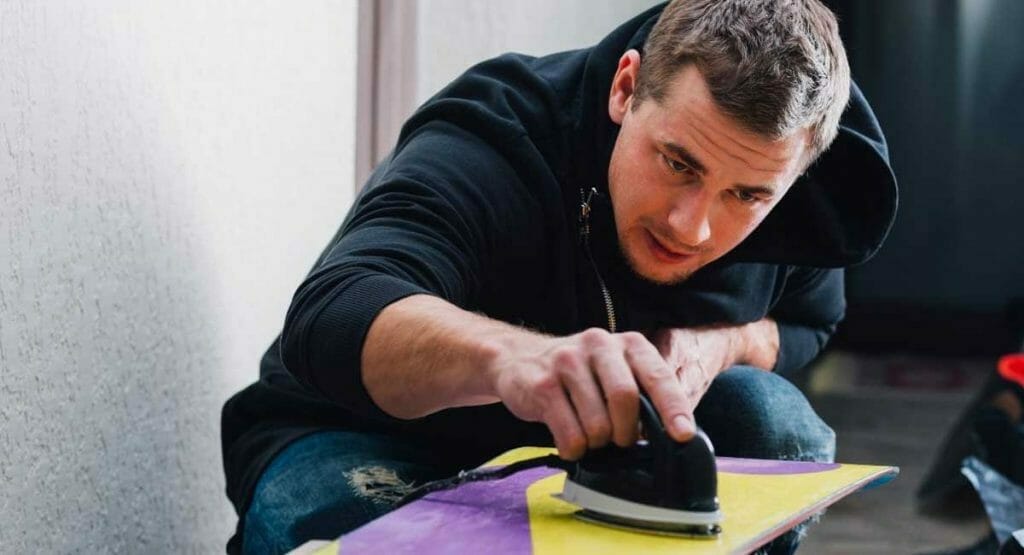 The summary of it all is that applying a fresh coat of wax on a new snowboard is the greatest way to have a fantastic ride and enjoy a long-term performance from your board. You can learn more about how to wax a new snowboard, here.

How Often Should You Wax Your Snowboard?

Now to the crux of the article.

Earlier, it was stated that it depends. There are different types of snowboards, and therefore, different factors that will affect how often you should wax your snowboard. That said, a basic factor you should know is that the frequency of board waxing is dependent on how frequently you use it.

There are two major types of snowboard bases used in making snowboards:

You need to understand that if you ride in harsh or extra snowy conditions, you’ll need to wax more frequently. On the other hand, if you’ve been riding on smooth and soft terrain, your waxing work will last a lot longer.

If you’re riding in rough terrain or where the snow level is low, you’re likely to strike some hard obstacles. This will cause you to wax more frequently to maintain a protective coating.

How often your wax needs to be changed is dependent on different temperature ranges. The wax will wear off faster in warmer temperatures.

Your snowboard doesn’t necessarily need to be at a maximum speed, but you don’t want to be caught on unpleasant stops. If you’re a beginner snowboarder or a freestyle rider who wants to approach jumps, and other tricks at a slower pace, you may not want a high acceleration.

Following this reason, you may want to delay waxing, or a better option is settling for an extruded base (which is a popular choice for a beginner or a freestyler). However, if you’re all about the speed, you need to wax more frequently.

How Often You Should Wax Your Snowboard

Having looked at the determining factors, the question of“how often should you wax your snowboard?” can now be specifically answered based on the snowboard base material. Some people wax their board after every long ride, however, this isn’t necessarily needed.

Waxing every 2-3 full days of riding on a sintered base is recommended for the best performance. It’s not a must to wax as often as stated, but if you want to enjoy a smooth snowboarding trip and the best performance it’s a good idea to wax frequently.

If you’re willing to make that sacrifice, you can decide to wax less frequently. However, depending on the determining factors listed above (especially the conditions you ride them in and how fast you want it), you should wax at least every 5-10 days of riding.

This means that you can probably get away with waxing it less frequently. Surfing every 2-3 days will help you get the most out of your extruded base. However, waxing it every 10 days of riding might suffice as you might not notice much of a change if you ignore your waxing obligations.

How Do You Know When to Wax Your Snowboard?

We understand it might be difficult to predict how long the wax will last on the board. That’s why it helps to be aware of the tell-tale signs and signals of when it is time to dig out your snowboard wax kit.

As a general rule, once you notice your snowboard having trouble getting up to speed, you should look at the bottom of your board. If your board appears to be dry, you will need to wax it. The dryness is usually more evident towards the edges of the base, where the wax is rubbed off faster as you spin and apply pressure.

Even if your objective is not to be the quickest rider on the mountain, a smooth sliding snowboard has a few other advantages.

First, a properly waxed board will help you get across flat sections without having to unclip and push. In most cases, it will also allow your board to ride more smoothly and reliably, making turns feel less sticky and smooth when the snow warms up.

Is it Safe to Change Your Snowboard Wax Yourself?

You might notice your board is slower than it usually is when you’re out on the slope. However, resist the temptation to scrape your wax off and rewax at that point. When you are on the hill, one of the worst things to do is scrape your board straight into the snow. This method can release up to ten times the amount of wax into the environment. You should always remove and dispose your scrapped wax properly.

In most cases, wax gets everywhere. This is why it is wise to lay down a sheet to catch all the scrapings. Then you can easily sweep them up and toss them in the garbage. This way, you can be sure all wax is properly disposed of.

Most times, people prefer to buy the wax, a scraper, and a waxing iron to do the waxing themselves from the comfort of their homes. After all, it is cheaper to change your board wax yourself. However, that doesn’t mean it is safer. You should consider taking your board to a snowboard/ski shop for waxing. This results in less waste and confidence in a job well done.

How to Remove Old Wax From Your Snowboard

You’ll have to remove excess wax every time you wax your board, but as you wax, you must learn to use less wax if you notice you always have to scrape off excess wax. You don’t need to wax the entire base of your snowboard. All you need to do is to fill the pores of the base.

How to Wax Your Snowboard Correctly

Waxing is essential for your board’s overall performance and personal enjoyment. It will not only let you glide effortlessly, and cleanly shift from one edge to another, but it will also help your snowboard last longer.

You’ll need the following items to wax your board:

There are some mistakes you need to avoid while waxing your snowboard:

The Basic Process to Wax Your Snowboard

To get a more practical understanding of what’s been explained, check out this video about how to wax your board.

So, how often should you wax your snowboard? Hopefully, this article has answered this question for you and everything you need to know has been thoroughly addressed. Just keep in mind to avoid the common errors stated earlier while you’re waxing your board. You’ll be able to wax your board without much hassle with our guide!