So, you have watched a few videos on YouTube, read a few articles on skiing and think you are ready to try your hands (or feet, as the case may be) at the slopes. But have you mastered how to stop on skis?

A common cause of skiing accidents, especially with beginners, is a disregard for safety while skiing. We believe that everyone should fully immerse themselves in safe skiing, so below are some safety tips to help you stop on skis when skiing downhill.

How to Stop on Skis

There are different techniques that you can apply to stop your skis. Beginner skiers may need help from other professional skiers with their first few trials until they can try it on their own.

After several practice sessions, muscle memory should kick in and do the rest of the work. These techniques include:

This is also called the snow plough, wedge stop, or pizza stop in some circles. This is because you must push the backs of your skis to create a wedge shape, like the shape of a slice of pizza. The bigger the wedge you create, the faster you stop.

This technique is easy enough for beginners to learn first. When in a snow plough position, use your ankles to press the inside edge of your skis into the snow. This will help you remain stationary on steep slopes before you are ready to move again.

When creating the snow plough shape, the nose of your skis almost touches in the front while the back spreads out to create that V-shape. “Almost” is the key word here. If your skis touch and cross at the front which is a common mistake that beginners make, then you will lose your balance and can be more dangerous on steeper slopes.

How to Snowplow Stop

Common Mistakes to Make on a Snowplow Stop 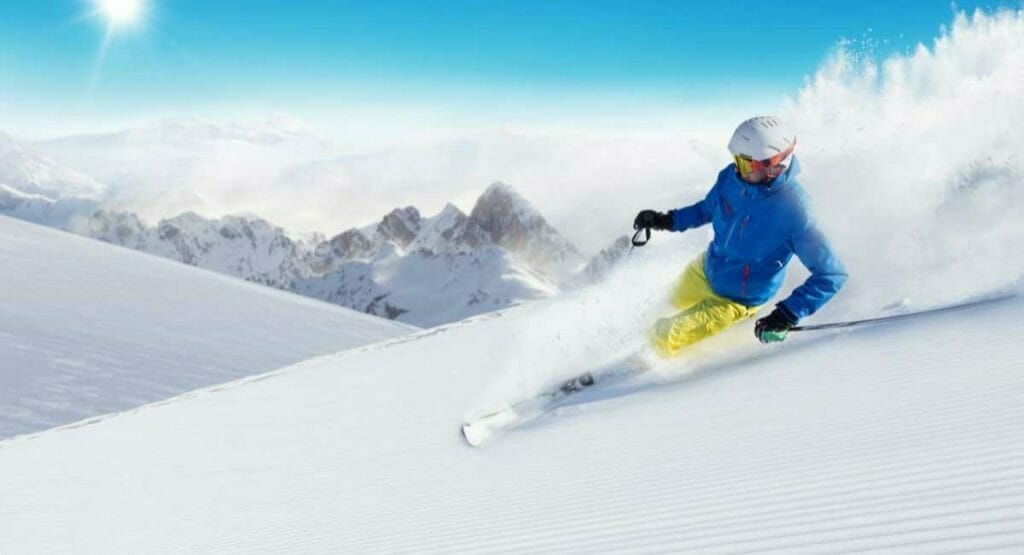 Hitting the brakes on at a time

You must simultaneously apply pressure on the inside edges of both skis. If you do it one at a time, you could turn too fast and lose your balance. This is called ‘catching an edge’ because one edge of your ski is caught in the transition while the other continues.

Leaning too much to the back

If you lean too much to the back, it shifts your weight and applies pressure on the back of your skis. This will make it harder for you to shift into the snowplow stop.

Using the ski poles to stop

The ski poles will obviously not work when you try to use them to stop. The primary use of a pole plant is for balance and stability. Just focus on stopping with your skis alone.

Stopping on a steep terrain

Try stopping on gentle slopes or shallow ones first. As you progress and build up gradients, you can try more difficult terrains.

Not assuming the correct stance

When performing the snowplow stop, your knees need to slightly point inwards to keep the skis on the edge. If your skis are flat on the snow, you won’t stop. If you don’t make a wide enough angle, you will not stop fast enough, if at all.

This technique is also called the parallel hockey stop. Although the snow plough is easier to learn, the parallel stop is the most frequently used ski technique for stopping.

As you will need to get into a parallel stance, you can only use this technique when you can ski parallel. Some people call it the French fry stance because the skis look like two french fries lying side by side.

The parallel stop requires you to quickly rotate both skis at the same time and finish with your skis pointing across the slopes. Once you have perfected this technique, you can make a quick stop on any type of terrain.

How to Parallel Stop

Decide what direction you want to stop in as you come down the slope. If you choose to finish your stop facing the left, then the following steps will apply to you.

Leaning too much to the back

When you lean back too much, you put pressure on the back of your skis and make it difficult to turn them across the slope. Instead, use the balls of your feet to keep your body weight in the middle of the skis.

Placing weight on the inside ski

You should place your weight on the outside downhill ski to make your turns easier. If you place weight on the inside ski, it prevents your skis from turning fast enough.

Moving at a slow pace

You execute the parallel stop better when you are moving at full speed. However, if you are still learning the ropes, you can practice stopping at moderate speeds and increasing the difficulty as you become more confident.

Only your feet and legs are used to turn the skis. Your upper body should remain in an upright position. If you twist and turn too much, it could cause you to lose your balance.

Riding Out Each Turn

It is not unusual to hear of beginner skiers losing speed control – that’s usually the next thing that happens after they learn to move forward. It is harder for them to lose enough speed to pull to a full stop without losing control.

If you learn how to effectively turn your skis, you can ride out each turn as an alternative to stopping yourself if you lose control of your speed. The trick is to make a series of C-shape turns on the slope (for intermediate skiers) as you move downhill.

More experienced skiers can ski in an S-shape. Beginner skiers can ride out each turn as it moves slightly up the hill to reduce their speed. If you have enough room, you can bring yourself to a gradual stop.

If you don’t have enough room, you can use the snowplow stop to control your speed until you can bring yourself to a stop.

How to Fall Safely While Skiing

After describing the three techniques to keep your speed under control – if any of these methods fail, you will need to know how to safely fall on your skis.

Skiers with expert or intermediate skills fall daily at practice but will always get back up in one piece. Most beginners on the other hand, will sustain serious injuries after a gentle fall despite wearing safety gear.

The trick to falling safely is to reduce the impact the fall has on your body. If you land on a single body part, you will end up hurting yourself but if you spread yourself out so that the impact is spread across a wider surface, it minimizes the impact of a bad fall on your body.

How Different Snow Conditions Affect Your Ability to Stop

Skis depend on friction to parallel turn, control speed, and stop. Different snow conditions provide varying amounts of friction, which in turn determines how effectively you stop while skiing downhill.

Deep powder gives your skis more friction than a groomed slope and makes it easier for you to stop or slow down.

Ice patches and compact snow are harder to navigate because they provide very little friction. Most beginners have difficulty moving or stopping on slopes with ice patches or compact snow.

You’ll need more turns than you would take on powder to slow down on icy or compact snow.

How to Navigate on Ice or Compact Snow

Be More Subtle With Edge Control

Because icy patches and hard snow are more slippery than fluffy, powdery snow, you’ll slide much faster. You can slow down using the same turn technique as on fresh snow, but you’ll have to be more patient, precise, and subtle with your movements to give your skis time to react to the reduced friction.

If you cannot slow down on an icy patch or hard-packed snow, then remain stable on your skis and don’t make any sharp turns until you hit more powdery snow.

Don’t Panic When You Slide

Sometimes, you can slide through a particularly icy patch while making a turn. Don’t panic yet. Just allow your skis to make the slide with a larger turn radius. Don’t make any sudden movements, just focus on maintaining your balance until your skis complete the turn.

While turning on smaller patches, you can keep your skis parallel as you slide through them.

A slightly wider stance gives you more balance and stability on your skis. Emphasis on “slightly.” While a wider base provides greater balance, you don’t want to stand too wide and lose control.

If you cannot turn down a very steep and icy patch, consider sliding down vertically to slow down. This is called side-slipping.

To side-slip, release your edges to stop them from digging into the terrain and keeping you still, then flow with the movement.

How to Stop on Icy or Hard Snow

Stopping on hard or icy snow can be a bit of a challenge. You need to dig into your edges at a greater angle before they can bite into the iced snow.

You can stop using your edges once you find yourself on less compact snow. However, you must maintain great pressure on the inside edges to keep your balance and control the stop.

Making a parallel or hockey stop on compact ice takes more control and greater reflexes to balance as you adjust your skis and body posture.

It’s almost impossible to stop on a steep hill with solid ice because there’s very little time or force to find balance on the ice. But don’t worry — surfaces like this are very rare on slopes prepared for skiers.

Before you enthusiastically hit the slopes, beginners should learn how to pull the brakes and control your speed in a pinch to prevent unnecessary safety hazards. Every skier worth their salt knows that you cannot get it right at the first try, it’s important to keep trying and practicing what you have learned a couple of times until you get the hang of it.