When you’re just beginning to learn how to snowboard, you’ll definitely fall over a lot. But if losing your balance becomes a permanent part of your snowboarding, maybe it’s time to go back to the drawing board to investigate your techniques and style.

One of the most common causes of falling while snowboarding is catching an edge, especially for dual-edged snowboards. So today, we will discuss how to not catch an edge snowboarding by improving your techniques and stance.

What Does Catching an Edge Mean?

Edges are smooth and sharp metal strips embedded under your snowboard on the toe and heel sides. These edges help you maneuver your board and control its direction and speed.

They’re designed to move in a single direction, and if you use the wrong edge in the wrong situation, it’ll get caught in the snow and throw you off the board. This is what is commonly known as “catching an edge.”

Why Do You Catch an Edge?

There are two potential reasons for catching a board edge:

Most snowboarding techniques involve one edge interacting with the snow while the other floats slightly above the ground.

When you are sliding down steeper slopes, the distance between the ground and the trailing edge is pretty wide, but this gap decreases on gentle slopes, increasing the chances of your trailing edge getting caught in the snow and making you trip.

The same is the case after a heavy snowfall when the overall thickness of snow on the ground increases.

The second possible reason you’re repeatedly catching an edge is the direction in which you skate. Skating straight down a hill means the edges of your snowboard run parallel to the snowy terrains. In this case, there are lower chances of catching an edge.

The problem occurs when the edge runs across or at an angle to the ground. This increases the friction between your edge blades and the snow, pushing you closer to a fall if you don’t stop.

While snowboarding on a flat base is easy, even if you’re turning and sideslipping, you have to be more careful and take a few extra precautions if you have edges on your board.

How to Not Catch an Edge Snowboarding

If you have a snowboard with edges, there is always a chance that you might trip. Here are five precautions you can take to significantly reduce your chances of catching an edge:

1. Clear Out the Track

You’ll only catch an edge if the trailing edge interacts with the snowy slope. The easiest way to prevent this is by clearing out the track. Scoop out extra snow from your path and give your edge enough space to move.

The gap between your edge and the slope should be large enough to account for any unexpected hurdles like a sudden lump of extra snow or a dip in your trailing edge.

The only problem is understanding how much clearance your edges need, which can only be learned with practice. For instance, if you’re skating straight down a hill, you don’t have to make a huge clearance. If you end up removing too much, there might not be enough snow for your board to move and glide on.

Snowboarding is a dynamic sport, which means your style, movement, and pressure on the edges will keep changing. That’s why snowboarders need to judge which edge is under more pressure and switch accordingly.

Remember, you can only switch edges when your snowboard is straight with no separate trailing and leading edge. If you try to swap the edge in the middle of a sideslip, the extra pressure on the leading edge and the sudden weight shift might cause it to get caught in the snow.

The number one rule to prevent your edge from catching in the snow is to keep a wide gap between the trailing edge and the snow. However, the edge angle automatically reduces on flatlands, making you prone to tripping.

On a flat surface, you can either reduce your speed or maintain the existing momentum you get from the slope. If you’re trying to reduce your speed, turning sideways is fine as long as you put most of the pressure on the leading edge. If you just want to maintain the speed, keep moving forward.

You cannot afford to move sideways and flatten your board at the same time. This will further reduce the angle between the edge and the ground, which in turn will increase your chances of catching an edge.

4. Keep Your Snowboard Straight To Increase the Speed

If you want to increase your speed while going downhill, you have to minimize the friction between the snow and your board. The best way to do this is by positioning your board to face forward. In this position, the edges run parallel to the slope, minimizing friction and lowering your chances of catching an edge. 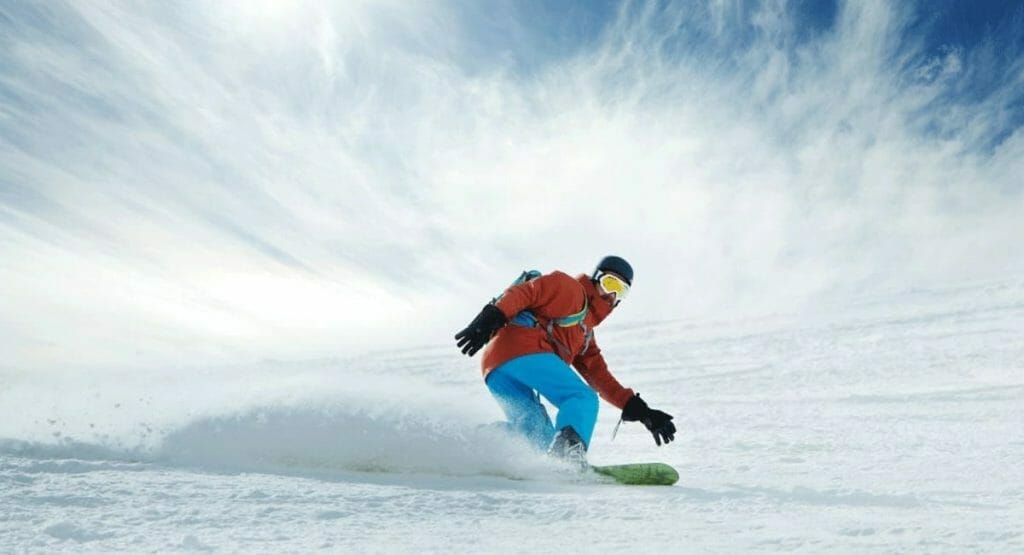 Forcing your snowboard to accelerate while you’re moving sideways will put extra stress on the edges and increase the friction. Increasing your speed in this situation is impossible, not to mention you’ll be at a greater risk of falling.

Catwalks can be challenging to navigate for beginner and intermediate riders. These are narrow and gentle mountain parts that usually connect two or more other trails. Because these tracks are so narrow, you typically have less clearance and a higher chance of tripping.

Another reason to avoid them is the lack of space for turning your board. Once you enter the catwalk in a particular direction, you have to maintain it because you don’t have a lot of space to make a turn.

Also, catwalks are jam-packed in peak seasons. This means you have to be extra careful with your speed and control on the board.

How To Reduce the Impact of an Edge Catch

Sometimes, your edge will get caught in the snow and throw you off balance even if you take all possible precautions. Although you cannot prevent the edge from catching in these scenarios, you can certainly minimize its impact. Here’s how:

When you evenly distribute the force, you reduce its impact on your body to a great extent. This can prevent you from getting seriously injured.

Overall, it’s important to keep your instincts sharp. The moment you feel you’re about to trip, prepare for your entire body to hit the snow at the same time.

It’s best to let your torso bear the maximum impact. You’re less likely to get hurt with a larger surface area and fatty layers. On the other hand, if you fall headfirst, your skull’s small surface area and minimal fat tissues can take a beating.

2. Bring Down the Center of Gravity

Also, reducing your center of gravity lowers the overall speed of the fall. So, for example, if you were falling from a pivot edge catch, it would turn into a flying edge catch, and your body would be thrown off the board.

A flying edge catch might seem more brutal, but it’s actually less painful. When your body is propelled forward, a lot of energy is dissipated in maintaining the forward motion. This means that when you actually hit the ground, the total energy causing the impact is very low.

Wearing thick, protective clothing will naturally lessen the impact of the fall. The impact you feel comes from the energy generated by the ground as a reaction to your fall. When the energy has to travel through your thick, padded outfit, it loses a lot of its strength, reducing the impact on your body.

Similarly, snowboarding goggles and helmets will protect your head and face from any serious damage by soaking up the majority of the energy of the fall.

Learning to avoid catching an edge while snowboarding and managing your snowboard edges takes time and practice.

Use the hacks mentioned above to minimize your chances of catching an edge. And, in case you do catch an edge, we hope our tips on wearing protective gear and falling while minimizing damage will keep you safe on the slopes.